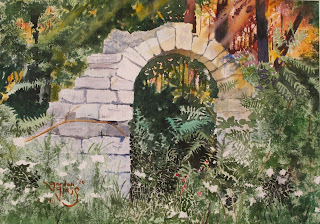 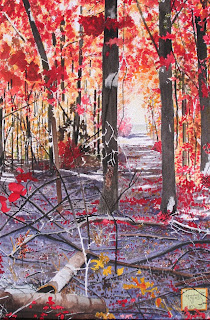 Gordon Glass lives in Richland Center. He holds a Bachelors and Masters degree in English from the U.W. – Madison.  A self-taught artist,  he started out doing pen and ink – not only because of a love of the medium, but because pen and ink is relatively inexpensive to reproduce. He has done over a hundred pen and ink collages of cities, towns and villages in the tri-state area.  His prints have been sold locally as community fund-raisers. Two years in a row, he won first prize in graphics at the Spring Green Art Fair. He has also published a book of poetry called THE BLOOD TRUCK, which was published by North American international in 2001. A subsequent volume is ready, it's called All WHISPER LOSS. A book called FOURTEEN PAINTINGS – FOURTEEN SONNETS was published two years ago. This book consists of fourteen of Gordon's watercolor paintings  - which form- a  thematic series -  and fourteen sonnets written, inspired by each of the paintings. The first edition has sold out.  I don’t know if I’m a poet who thinks he is an artist or an artist who thinks he is a poet. The jury is still out on that. 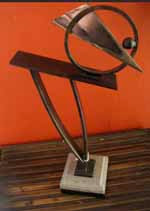 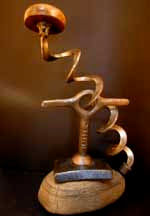 Fired clay, carved wood, welded metal, glass or plastic, whatever works is fair game of the image in mind for the sculpture David Myers produces.  The goal of his work is to understand and be understood.  Inspiration comes from life, growth, nature and beauty.  It begins in the mind and ends in the hands.  David's work can also be seen in small museums and galleries.  He lives and works out of his studio in Sparta, Wisconsin.